The VMI is an ongoing collaboration among the three Vincentian universities in the United States—Niagara University, St. John’s University, and DePaul University. This two-year cohort program seeks to engage senior leaders at our three institutions in support of their institution’s distinctive Vincentian and Catholic identity. Through collaborative online coursework, web conference discussions, capstone projects, and a Vincentian Heritage trip to France, the VMI leaders strive to answer the question:

What does it mean for our institution to be a vibrant Catholic, Vincentian university in the twenty-first century? 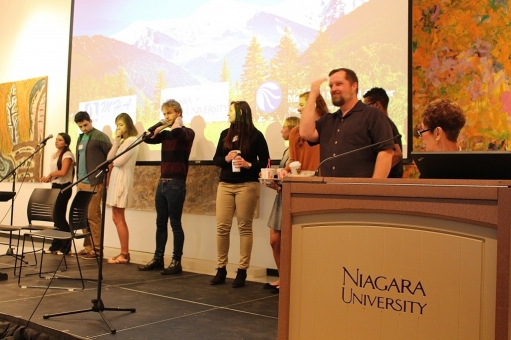 Notes from a Previous VMI Cohort...

For the members of the Niagara University’s last VMI cohort, the answer to the question “What does it mean for our institution to be a vibrant Catholic, Vincentian university in the twenty-first century?” was directly inspired by the words of St. Vincent DePaul:

“Mental disease is no different than bodily disease and Christianity demands of the humane and powerful to protect, and the skillful to relieve, the one as well as the other.”

This quote got Dr. Tim Osberg, Associate Professor of Psychology and 2014-2015 VMI member, thinking about the growing mental health needs of students.  Then he, along with the other VMI members undertook a number of campus initiatives aimed at better understanding and better serving students facing mental-health issues.  Their project was kicked off by a conference held at NU in the fall of 2015 entitled, “Changing Our Minds, A Mental Health Summit,” which was attended by over 200 people.

During the conference, Niagara University theatre students and psychology majors from Active Minds, performed a series of engaging role plays that highlighted the need to respond differently to the subtle signs of psychological disorders.  The conference’s keynote address was given by Eric Weaver, a dynamic speaker who served as a police sergeant in Rochester and founded Overcoming the Darkness. His presentation focused on his own struggles with mental illness and provided advice on how individuals can combat stigma.

Dr. Osberg also reviewed some of the signs and symptoms of mental illness. He then presented a set of strategies he recently developed for effectively supporting someone into the mental health system.  Finally, a panel of peer advocates and key local mental health professionals provided perspectives on helping people get the mental health services they need.