Throughout its long history, Niagara has remained true to the Vincentian principles of preparing students for personal and professional success while remaining committed to the values of its patron, St. Vincent de Paul, as well as to its Catholic heritage. Niagara relies on a tradition of five Vincentian virtues, which breed confidence. It puts scholarship in action, which produces clarity about one's self and the world. It  encourages all to seek the "good" and to find their divinely given purpose. 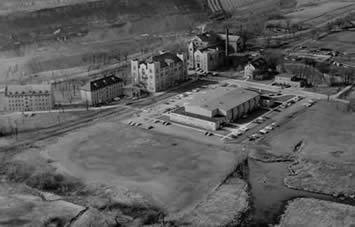 Who was St. Vincent de Paul?

St. Vincent de Paul was a Catholic priest of the 17th century who "changed the face of France." He put into place a complex and effective organization to address the bodily and spiritual needs of the people of his time, and set up structures to ensure that his good works would be effective, flexible, and lasting. He was one of the pioneers of the promotion of lay involvement in the Church, and of the empowerment of women in Church and society. He was an exceptionally skilled organizer planner. Yet, in all of that, he was a humble, holy man. One of his foundations, the Congregation of the Mission -- known in this country as the Vincentian Priests and Brothers -- sponsors and leads the University. St. Vincent's ideas shaped a constantly growing worldwide movement now known as the Vincentian Family. Every Niagaran is a part of that great tradition.

Niagara University was founded in 1856 as the College and Seminary of Our Lady of Angels, which began with six students and two faculty. The founders of the university, Vincentians Priests, the Most Rev. John Timon, C.M. and Rev. John J. Lynch, C.M., purchased two adjoining farms, the Vedder and De Veaux farms, on Monteagle Ridge.   Over the next 25 years, the college and seminary grew and prospered producing graduates that entered such fields as the priesthood, law and medicine, teaching, journalism and many others. Indeed, by the spring of 1863, the college had become so successful that the New York Legislature granted a charter empowering the college and seminary to award degrees to its graduates.

Twenty-five years after its founding, on August 7, 1883, Grover Cleveland, then governor of New York, gave permission to the college and seminary to change its name to Niagara University. The seminary remained a full and vibrant part of the university community until 1961 when it was moved to Albany, New York.

The university has evolved over its long history into an institution that offers degree programs in the Arts and Sciences, Business and Teaching, Nursing, and Hospitality and Tourism.